"In The Gloom Of Whiteness, In The Great Silence Of Snow"

In the gloom of whiteness,
In the great silence of snow,
A child was sighing
And bitterly saying:  'Oh,
They have killed a white bird up there on her nest,
The down is fluttering from her breast.'
And still it fell through that dusky brightness
On the child crying for the bird of the snow. 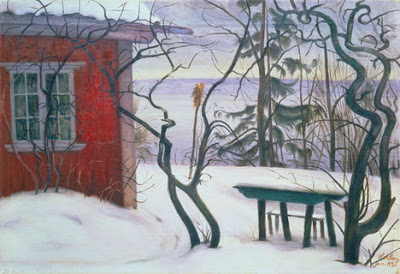 In her annotation to the poem, Edna Longley states that "the idea is traditional, as in the riddle of the snow and the sun, which begins:  'White bird featherless/Flew from Paradise.'"  Ibid, page 175.  Longley also notes that the image appears in the "December: Christmass" section of John Clare's Shepherd's Calendar:

And some to view the winter weathers
Climb up the window seat wi glee
Likening the snow to falling feathers
In fancy's infant extacy
Laughing wi superstitious love
Oer visions wild that youth supplyes
Of people pulling geese above
And keeping christmass in the skyes.

(Spelling and punctuation (or the lack thereof) are as they appear in Clare's original manuscript.)  I have previously discussed Thomas's admiring discussion of Clare's poem "Love lies beyond the tomb."  Perhaps Thomas had the above passage in mind when he wrote "Snow."

But, beyond its historical sources, the poem shows Thomas's acute attentiveness to the world around us, and his ability to memorably describe what he sees.  Those of us fortunate enough to have experienced a snowfall will likely agree that these phrases are right on the mark:  "the gloom of whiteness"; "the great silence of snow"; "that dusky brightness."  In one sense, the phrases may seem deceptively commonplace;  we may say:  "Yes, of course, that's exactly what it is like."  But it is the function of the ("true and not feigning") poet to tell us what we all know (or ought to know), but have not yet seen. 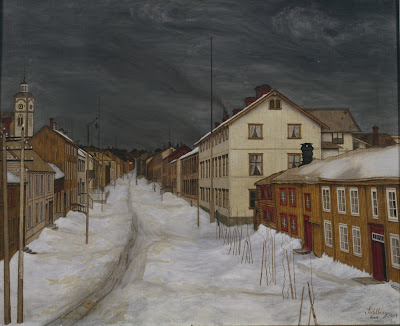 It must be twenty years at least since I last heard Ivor Gurney's setting of Snow, but the music, for tenor & piano, came instantly to mind as I read the poem. It's recorded on an LP 'Severn and Somme' which I bought not long after it was produced in 1977. There's also selection of Gurney's own poems read in a rich Gloucestershire accent by Leonard Clark. If the turntable still turns I must listen to it again. I don't know if Helen Thomas heard Gurney's setting.

Thank you for stopping by again, Mr Thomson. And thank you for the reference to Gurney's setting of 'Snow.' I'm ashamed to say that my knowledge of Gurney's music (in general) and of his settings of Thomas's poems (in particular) is limited. A quick search of Amazon.uk discloses that 'Snow' appears on at least two recent collections of Gurney's songs: Susan Bickley's 'Ivor Gurney: Songs' (2009) and Ian Partridge's 'English Songs: Ivor Gurney and Frederick Delius' (2006). I'm sure that there are others as well. I need to listen!

I wonder about Helen Thomas as well. Given how long she lived, and her friendship with Gurney, I wouldn't be surprised if she heard his settings. I wonder if she says anything in her autobiographical writings, or if Gurney's biographers have said anything?

That painting reminds me of New Haven. And at exactly this time of year.

Fantastic post, I really look forward to updates from you.

Shelley: thank you for stopping by again. Roros is in Norway. I suspect that it is colder than New Haven at this time of year.

Thank you, Anonymous. I hope that you return soon.