"The Blue Vault Of The Air": Andrew Young And John Clare

Because I had not read it in quite some time, I had forgotten that one of John Clare's best-known poems shares an image with one of my favorite poems by Andrew Young.  Here is Young's poem (which I previously posted on March 17 of this year):

Strong-shouldered mole,
That so much lived below the ground,
Dug, fought and loved, hunted and fed,
For you to raise a mound
Was as for us to make a hole;
What wonder now that being dead
Your body lies here stout and square
Buried within the blue vault of the air? 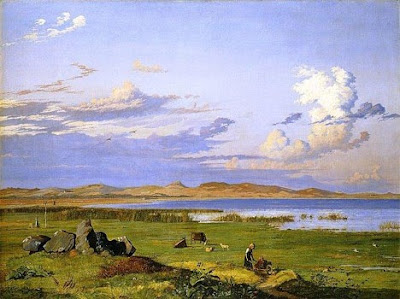 And here is Clare's poem, which was written during his latter days in an asylum:

I am -- yet what I am, none cares or knows;
My friends forsake me like a memory lost: --
I am the self-consumer of my woes; --
They rise and vanish in oblivion's host,
Like shadows in love's frenzied stifled throes: --
And yet I am, and live -- like vapours tost

Into the nothingness of scorn and noise, --
Into the living sea of waking dreams,
Where there is neither sense of life or joys,
But the vast shipwreck of my life's esteems;
Even the dearest, that I love the best
Are strange -- nay, rather stranger than the rest.

I long for scenes, where man hath never trod
A place where woman never smiled or wept
There to abide with my Creator, God;
And sleep as I in childhood, sweetly slept,
Untroubling, and untroubled where I lie,
The grass below -- above the vaulted sky. 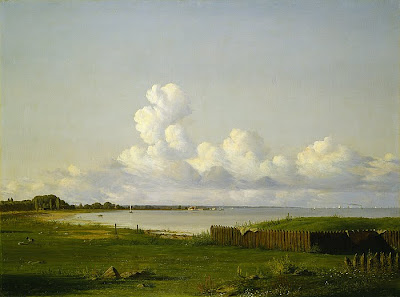 Georg Emil Libert
"View of the Sound from Langelinie, Near Copenhagen" (1839)
Posted by Stephen Pentz at 9:28 AM

Thank you for visiting and commenting again, red dirt girl.