Charles Whitehead's sonnet "A type of human life this forest old" ("Life Explained, Part Five": September 2, 2010) reminds me of a poem by George Meredith (1828-1909) that shares, I think, a similar feeling:

A wind sways the pines,
And below
Not a breath of wild air;
Still as the mosses that glow
On the flooring and over the lines
Of the roots here and there.
The pine-tree drops its dead;
They are quiet, as under the sea.
Overhead, overhead
Rushes life in a race,
As the clouds the clouds chase;
And we go,
And we drop like the fruits of the tree,
Even we,
Even so.

The western wind has blown but a few days;
Yet the first leaf already flies from the bough.
On the drying paths I walk in my thin shoes;
In the first cold I have donned my quilted coat.
Through shallow ditches the floods are clearing away;
Through sparse bamboos trickles a slanting light.
In the early dusk, down an alley of green moss,
The garden boy is leading the cranes home. 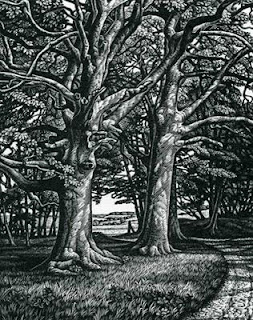 Howard Phipps, "The Clarendon Way"
Posted by Stephen Pentz at 12:24 AM

I just now found this blog. Gold pieces are springing from my screen! Thank you!

ethel mertz: Thank you very much for visiting and for your kind comment.

Your name brings back memories -- however, I will not disclose when I first watched Ethel and Fred! (Hint: the T.V. was black-and-white, not color.)