Please do not impute any philosophical, theological, political (Heaven forbid!), or sociological (you must be joking!) motives into my decision to post the following passage from The Adventures of Augie March.  I post the passage simply because, when I read it, I smiled and shook my head in delight at the evergreen wondrousness of Saul Bellow.  I am aware that some "literary critics" believe that these sorts of Bellovian apostrophes sound too much like Bellow himself and thus break the so-called "fictive" spell.  Oh well.

"However, as I felt on entering Erie, Pennsylvania, there is a darkness.  It is for everyone.  You don't, as perhaps some imagine, try it, one foot into it like a barbershop 'September Morn.'  Nor are lowered into it with visitor's curiosity, as the old Eastern monarch was let down into the weeds inside a glass ball to observe the fishes.  Nor are lifted straight out after an unlucky tumble, like a Napoleon from the mud of the Arcole where he had been standing up to his thoughtful nose while the Hungarian bullets broke the clay off the bank.  Only some Greeks and admirers of theirs, in their liquid noon, where the friendship of beauty to human beings was perfect, thought they were clearly divided from this darkness.  And these Greeks too were in it.  But still they are the admiration of the rest of the mud-sprung, famine-knifed, street-pounding, war-rattled, difficult, painstaking, kicked in the belly, grief and cartilage mankind, the multitude, some under a coal-sucking Vesuvius of chaos smoke, some inside a heaving Calcutta midnight, who very well know where they are."

An aside: the "September Morn" referred to by Bellow is a painting by Paul Emile Chabas (who was, naturellement, from Paris) that caused a scandal when it was first displayed in the U.S. in 1913.  It was subsequently reproduced in large quantities for display in, among other places, barbershops. 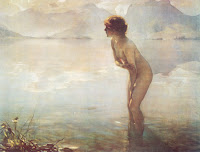 A second aside:  needless to say (but I will say it anyway), I harbor no ill will whatsoever against Erie, Pennsylvania, or its inhabitants.  I have never been to Erie, but I am sure that it is a wonderful place.  To borrow the title of a prose piece by Philip Larkin about his home town, Coventry:  "not the place's fault." 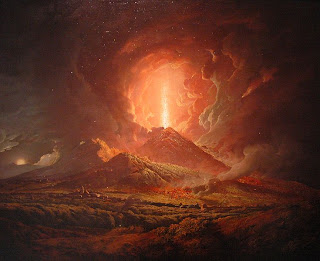 This is very good. Thanks. Neither have I been to Erie, but I know someone who lives not far from there, and he's a fine fellow.

But what you quote from Bellow somehow brings to mind this, from Milosz's "ABC's" (and far from Erie, in miles at any rate): “Anus Mundi. The cloaca of the world. A certain German wrote that definition of Poland in 1942. I spent the war years there and afterward, for years, I attempted to understand what it means to bear such an experience inside oneself.” Milosz continues: “Horror is the law of the world of living creatures, and civilization is concerned with masking that truth. Literature and art refine and beautify, and if they were to depict reality naked, just as everyone suspects it is (although we defend ourselves against that knowledge), no one would be able to stand it.” “It is,” he writes in the same essay, “entirely human and understandable to be stunned by blatant criminality and to cry out, ‘That’s impossible!’ and yet, it was possible. But those who proclaim that God ‘abandoned us in 1941’ are acting like conservators of an anodyne civilization.” Whereupon follows the salient point: “And what about the history of humankind, with its millennia of mutual murder? To say nothing of natural catastrophes, or of the plague, which depopulated Europe in the fourteenth century. Nor of those aspects of human life which do not need a grand public arena to display their subservience to the laws of earth.”

The laws of earth; "darkness" (as Bellow says). Are they the same?

And then there is Emerson, in "Experience": “Every roof is agreeable to the eye, until it is lifted; then we find tragedy and moaning women, and hard-eyed husbands, and deluges of lethe, and the men ask, ‘What’s the news?’ as if the old were so bad.”

Mark: Thank you very much for visiting and for commenting. I am an admirer of "The Era of Casual Fridays," and I am delighted to have you check in here.

Thank you for reminding me about the passage from Milosz's "ABCs": it is exactly on point, isn't it? (I love Milosz's collections of prose thoughts -- in addition to "ABCs", I find myself returning to "Road-side Dog" and "A Year of the Hunter.")

And thank you also for the wonderful Emerson quote. It reminds me once again that my lack of knowledge of his work needs to be corrected before it is too late.