Charles Whitehead (1804-1862) had some early literary success in London, where one of his friends was a young Charles Dickens.  When Whitehead was asked by the publishing firm of Chapman & Hall to provide the text for sketches produced by the illustrator Robert Seymour, Whitehead declined the offer, but suggested that the firm use Dickens.  The result of this recommendation was The Pickwick Papers.

According to his discreet Victorian biographer, Whitehead was "a man of singularly nervous temperament" whose "career [was] irreparably marred by one fatal propensity -- a propensity which he acquired early in life, perchance at the Grotto tavern."  H. T. Mackenzie Bell, A Forgotten Genius: Charles Whitehead (1884).  The Grotto was "much frequented by young literary men, artists, and some few actors," and Whitehead was "the leading spirit of the place, being there every night."  Due to his "one pernicious habit, the influence of which he could never throw off," Whitehead migrated to Australia, where he hoped to make a fresh start.  Unfortunately, he died in Melbourne from (according to hospital records) "the effects of destitution."

Given this biographical background, one might well expect that a sonnet by Whitehead providing an Explanation of Life would not be, say, cheery.  And one would be right.  That being said, I think that it is a fine poem.  It sounds almost Elizabethan -- like something that could have been written by Henry Howard, Earl of Surrey, or Robert Devereux, Earl of Essex, as they awaited their beheadings.

A type of human life this forest old;
All leafy, wither'd, blooming, teeming, blasted;
Bloom that the reign of summer hath outlasted,
And early sere, and blight that flaunts in gold;
And grass, like sorrow, springing from the mould,
Choking the wholesome tree; and verdure wasted,
Like peace; and berries, like our bliss, untasted;
And thorns, like adverse chances, uncontroll'd.
These flowers are joy that ne'er shall form a wreath;
These lilies are unsure affection crown'd
Above neglect, the water; underneath,
Reeds, which are hope, still sadly standing, drown'd.
This hoary sedge is age of noteless years,
This pool, epitome of human tears! 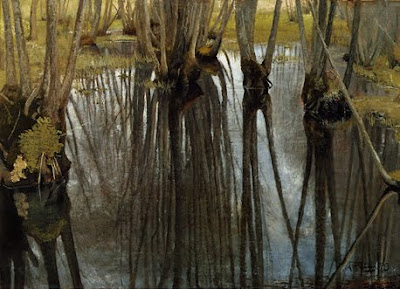 Another absolutely fine sounding, seasonally appropriate poem you've found, full of great, overripe lines like "berries, like our bliss, untasted" and "Bloom that the reign of summer hath outlasted." This one could be a textbook case for Eliot's idea of the Objective Correlative - ironic since this is the very type of poem the modernists wanted to annihilate.

Some say Plato hated poets, but he had nothing on the Tudors. Ouch!

Mr. Sigler: Thank you again for visiting and commenting.

As for the "modernists": some of them (and I am not saying that this is true of Eliot, who I am of two minds about) were/are unaware of the traditions that they were/are supposedly breaking from. I fear that they did not/do not understand that poetry is found in single poems and is timeless. Whew! End of pontificating for the day!