Trains In The Distance At Night: Siegfried Sassoon, Marcel Proust, And Emmylou Harris

I hold romantic notions about the sound of distant trains in the countryside at night.  Perhaps this is due to the fact that I am a city dweller.  Or perhaps it has something to do with country music -- Emmylou Harris singing "Tulsa Queen," for instance.

Siegfried Sassoon wrote the following poem near the beginning of the Second World War:

A Local Train of Thought

Alone, in silence, at a certain time of night,
Listening, and looking up from what I'm trying to write,
I hear a local train along the Valley.  And "There
Goes the one-fifty," think I to myself; aware
That somehow its habitual travelling comforts me,
Making my world seem safer, homelier, sure to be
The same to-morrow; and the same, one hopes, next year.
"There's peacetime in that train."  One hears it disappear
With needless warning whistle and rail-resounding wheels.
"That train's quite like an old familiar friend," one feels. 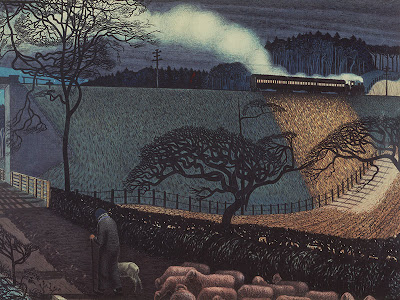 I would ask myself what time it could be; I could hear the whistling of trains, which, now nearer and now further off, punctuating the distance like the note of a bird in the forest, showed me in perspective the deserted countryside through which a traveller is hurrying towards the nearby station; and the path he is taking will be engraved in his memory by the excitement induced by strange surroundings, by unaccustomed activities, by the conversation he has had and the farewells exchanged beneath an unfamiliar lamp that still echo in his ears amid the silence of the night, and by the happy prospect of being home again. 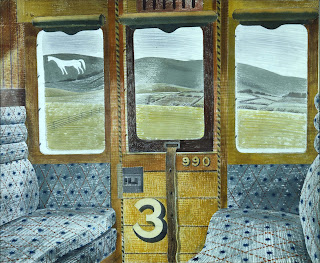 One can imagine Larkin on Sassoon's train writing a poem about a man's thoughts being redirected by a “needless warning whistle”...

Internet friends alerted me to your blog and I'm very glad they did!

pomposa: Thank you very much for visiting, and for your kind comment. I'm pleased that you found your way here.

Excellent observation about a possible Larkin poem. In addition to 'The Whitsun Weddings', I can think of one other train poem by Larkin: the one that begins 'The local snivels through the fields,' and closes with the cheerful thought: 'Death will be such another thing,/All we have done not mattering.' Oh, well: Larkin will be Larkin!

Fine images too - the Ravilious I knew, but thanks for the introduction to Claughton Pellew. I've been looking at others of his online - marvellous... Do you know the Paul Simon song Train In The Distance? Everybody loves the sound of a train in the distance, Everybody thinks it's true...

As always, thank you very much for visiting and commenting, Nige. Pellew is interesting, isn't he? I particularly like his wood engravings.

Thank you for the tip on the Paul Simon song - I wasn't aware of it. I'll try to track it down (pun not intended).

I am grateful to you. Because Eric Ravilious was an official war artist in WW2 and died both tragically and young, we tend not to know so much about his pre-war art. I came across his water colours as published in (rare) books, not hanging on walls.

Hels: Thank you very much for visiting and commenting, and for the kind words.

I first became acquainted with the work of Ravilious through books as well, and I have not had a chance to see any of his works on display either. I hope that I will be able to do so some day on a visit to England.