As you amble through the series of Georgian Poetry anthologies compiled by Edward Marsh from 1912 to 1922, you soon realize that you are not strolling through the "modernist" land of T. S. Eliot and Ezra Pound.  Here, rather, you come across the likes of Walter de la Mare, W. H. Davies, a young Robert Graves, Rupert Brooke, John Masefield, and Siegfried Sassoon.  Alas, not an Imagist or a Symbolist or a Free-Versifier in sight. 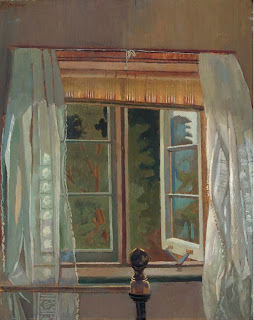 And, occasionally, you will encounter someone who is all but unknown today.  Someone who once may have written a small gem of a poem.  John Drinkwater, for instance.

At the top of the house the apples are laid in rows,
And the skylight lets the moonlight in, and those
Apples are deep-sea apples of green.  There goes
A cloud on the moon in the autumn night.

A mouse in the wainscot scratches, and scratches, and then
There is no sound at the top of the house of men
Or mice; and the cloud is blown, and the moon again
Dapples the apples with deep-sea light.

They are lying in rows there, under the gloomy beams;
On the sagging floor; they gather the silver streams
Out of the moon, those moonlit apples of dreams,
And quiet is the steep stair under.

In the corridors under there is nothing but sleep.
And stiller than ever on orchard boughs they keep
Tryst with the moon, and deep is the silence, deep
On moon-washed apples of wonder. 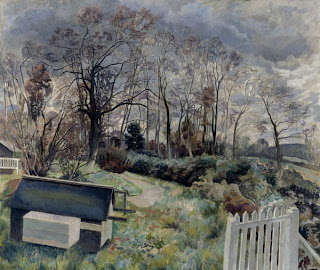 Lovely to see the Gilbert Spencer images. My parents used to see the Spencers around Maidenhead. I have included a snippet of Gilbert's memoir of Stanley and Cookham in my blog (frozen ink.blogspot.com). I shall enjoy reading more of your blog again. Thanks

E Berris: thank you very much for visiting, and for your comments. I appreciate the link to your blog: the piece by Gilbert that you posted is very nice. I also noticed that you posted an excerpt from A Month in the Country last month: one of my favorites!