"The Lattermath Will Be A Fine One": Edward Thomas

"Lattermath" is, I think, a lovely word.  The Oxford English Dictionary defines it as follows:  "The 'latter' mowing; the aftermath.  Also, the crops then reaped."  Edward Thomas fashioned a beautiful sonnet around the word.  The poem is untitled.

It was upon a July evening.
At a stile I stood, looking along a path
Over the country by a second Spring
Drenched perfect green again.  'The lattermath
Will be a fine one.'  So the stranger said,
A wandering man.  Albeit I stood at rest,
Flushed with desire I was.  The earth outspread,
Like meadows of the future, I possessed.

And as an unaccomplished prophecy
The stranger's words, after the interval
Of a score years, when those fields are by me
Never to be recrossed, now I recall,
This July eve, and question, wondering,
What of the lattermath to this hoar Spring? 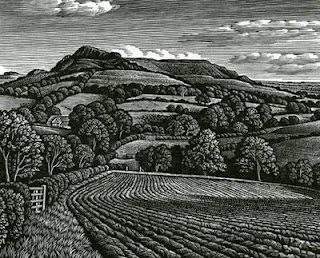 Thomas wrote the poem in the summer of 1916, after he had enlisted in the army, but before he was posted to France, where he died in April of 1917 at Arras.  Given these facts, there may be an understandable tendency for us -- who know the "lattermath" that actually awaited him -- to bring some sentimentality to the poem.  (Something that I readily confess to.)  However, the poem stands fully on its own as a beautiful meditation on the pasts, presents, and futures that we all ponder, regret, and hope for.  Thomas is indeed "wondering" about his own "lattermath," but, like any timeless poet, he speaks for us all. 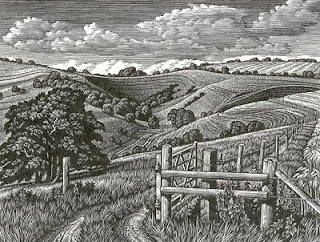 Howard Phipps, "Malacombe Bottom"
Posted by Stephen Pentz at 12:46 AM