I wish that I was competent to distinguish between crows, ravens, rooks, and jackdaws.  I do know that the largest and most ominous specimens that I have encountered frequent the graveyards of Japan.  Loud, demanding, and huge-beaked they were.  I liked to think of them as ravens.  But who knows?

Jackdaws seem less ominous, more comical -- but still clever.  The following poem by William Cowper is a translation of the Latin original by Vincent Bourne.  As I mentioned in a recent post ("Herodotus And William Cowper: On Certain Customs Of Thrace"), Bourne was a teacher of Cowper's at Westminster School, and Cowper translated a number of his Latin poems.

There is a bird, who by his coat,
And by the hoarseness of his note,
Might be supposed a crow;
A great frequenter of the church,
Where, bishop-like, he finds a perch,
And dormitory too.

Above the steeple shines a plate,
That turns and turns, to indicate
From what point blows the weather.
Look up -- your brains begin to swim,
'Tis in the clouds -- that pleases him,
He chooses it the rather.

Fond of the speculative height,
Thither he wings his airy flight,
And thence securely sees
The bustle and the raree-show,
That occupy mankind below,
Secure and at his ease.

You think, no doubt, he sits and muses
On future broken bones and bruises,
If he should chance to fall;
No; not a single thought like that
Employs his philosophic pate,
Or troubles it at all.

He sees that this great roundabout,
The world, with all its motley rout,
Church, army, physic, law,
Its customs and its businesses,
Is no concern at all of his,
And says -- what says he? -- "Caw!"

Thrice happy bird!  I too have seen
Much of the vanities of men;
And sick of having seen 'em,
Would cheerfully these limbs resign
For such a pair of wings as thine,
And such a head between 'em. 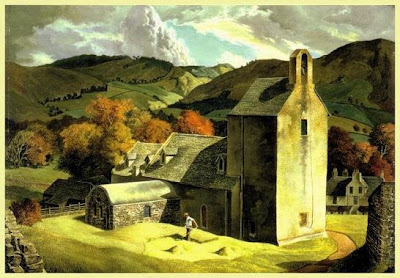