Herodotus And William Cowper: On Certain Customs Of Thrace

Herodotus relates the following anecdote about the Trausi, who were one of the tribes of Thrace:

"The Trausi in all else resemble the other Thracians, but have customs at births and deaths which I will now describe.  When a child is born all its kindred sit round about it in a circle and weep for the woes it will have to undergo now that it is come into the world, making mention of every ill that falls to the lot of human kind; when, on the other hand, a man has died, they bury him with laughter and rejoicings, and say that now he is free from a host of sufferings, and enjoys the completest happiness."

Herodotus, The Histories, Book V, Chapter 4 (translated by George Rawlinson) (1859).  When I came across this passage, I realized that the Trausi may have anticipated the gloomy conclusion arrived at centuries later by Arthur Schopenhauer and Giacomo Leopardi:  that humans would be better off if they had never been born.  (As I said, gloomy.) 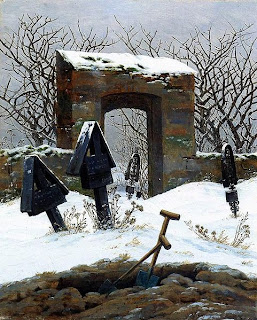 I had not thought about the passage for a while, but recently I came across a poem titled "The Thracian." The poem is a translation by William Cowper of the Latin original, which was written by Vincent Bourne.  Bourne (1695-1747) was an Englishman who wrote poetry in Latin.  Cowper was a pupil of Bourne's at Westminster School.  Later in his life, Cowper translated a number of Bourne's poems.

Thracian parents, at his birth,
Mourn their babe with many a tear,
But with undissembled mirth
Place him breathless on his bier.

Greece and Rome with equal scorn,
"O the savages!" exclaim,
"Whether they rejoice or mourn,
"Well entitled to the name!"

But the cause of this concern,
And this pleasure, would they trace,
Even they might somewhat learn
From the savages of Thrace. 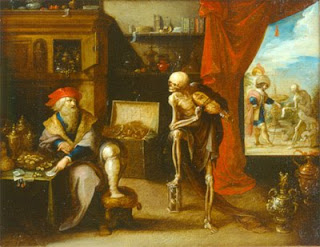 Frans Francken
"Death Invites the Old Man for a Last Dance" (1635)
Posted by Stephen Pentz at 3:04 AM

What a nice little poem. It captures Herodotus perfectly and applies it well. "Even they might somewhat learn" indeed. And us.

Dwight: Thank you for visiting, and for commenting, again. Given your interest in, and your excellent (and indefatigable) work on, Herodotus this year, I was hoping that you would see this.

It is a nice poem, isn't it? I was delighted to stumble upon it. Having no Latin, I cannot read Bourne's original, but Cowper's tone is wonderful, I think.

Absolutely my pleasure.
I struggled to remember where else in The Histories that the "Thracian theme" appeard and finally remembered it was in Artabanos' consolation of his nephew Xerxes. The King has just broken down in tears after reviewing his army and navy, mourning the shortness of life. His uncle comments that man is never so fortunate that he doesn't long for death many times during his sufferings. Artabanos' consolation ends with "And so because life is a hardship, death proves to be a human being's most welcome escape, and the god, who gives us merely a taste of sweetness in life, is revealed to be a jealous divinity." (7.46)

Dwight: thank you very much for the reference to Artabanos and Xerxes - it certainly ties in well with the Trausi. One could devote a lifetime to Herodotus and never be finished! Thanks again.